This morning and afternoon I gave my first talks of the season at Bates Nursery and Garden Center in Nashville (go see them--they are awesome), and one of things I promised the attendees is that I would post a few pictures of how I keep insects from laying eggs in my SFG boxes.

The structure is similar to protecting them from frost.  I put up frame made of 1/2" schedule 40 PVC pipe and drape it with fine netting--the kind used to make bride's veils.  It comes in widths up to at least 180" (although not every fabric store will have it that wide, so you might have to get it online).  I clip it to the frame with the same clips that I use for making the cold weather hoop houses. 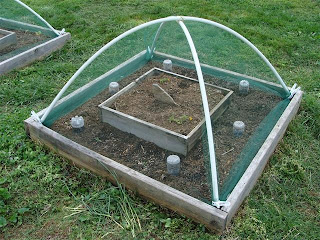 The following is a kohlrabi plant under netting.  The day I netted it, it had already been attacked by a tiny green worm. You can see the damaged leaf in the lower part of the photo.  The rest of the leaves came out after the net was put over the garden.... 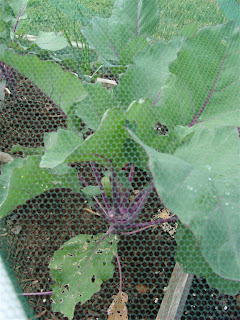 ....and as you can see with the netting  lifted, there was no further damage on the plant from then on. 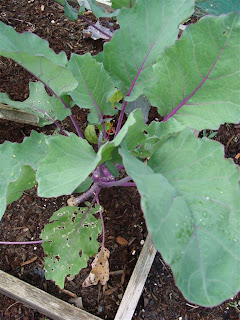 This does not mean the bugs didn't keep trying.  Here is a shot of a bug that actually just laid her eggs right on the net!  I crushed those eggs, because when they hatched the little guys would have been small enough to get thru the holes.  (I felt HORRIBLE about destroying those eggs.  That is another post for another day). 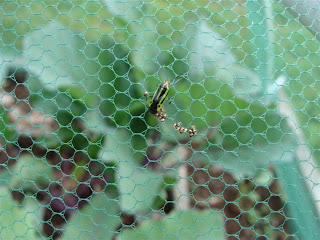 If you happen to be in the Middle TN area on Saturday, 13 April, you can catch a repeat of the talks I gave today.  11:00am is my Intro to Square Foot Gardening, and 2:00pm is my Intro to Four Seasons Gardening.  If you were at either of my talks today and I said I'd post something for you on the blog--please job my memory as to what it was I said I'd post.  :)  I remembered the netting but it seems like there was something else....