I think I fixed my dishwasher

For months I've been mad at my dishwasher.  I thought it was a lemon, and I was preparing to go shop for a replacement.  But after a careful and exhaustive discussion on Facebook, where the smartest people all hang out, I determined that it was worth a try to first get some real, honest-to-diety dishwashing detergent with those horrible phosphates that we've been warned are killing off our natural aquatic wildlife.

It turns out that dishwashing detergent with said phosphates is still available for industrial and commercial use, which means that while we homemakers are whining about our sad, dirty dishes that are the result of our having been denied the ONE INGREDIENT THAT GETS THEM CLEAN because it is "environmentally damaging", every restaurant, school, and hospital in america is happily getting all the clean dishes they can handle because they have not been denied that ONE INGREDIENT THAT GETS DISHES CLEAN.

So I went online and did a careful and exhaustive search for recipes, and found that all I had to do is go to the local hardware store and buy a $3.50 box of trisodium phospate, which is sold straight up as a heavy duty cleaner and wallpaper remover--so while you and I are lamenting our sad, dirty dishes, every paper hanger in america is happily getting all the heavy duty cleaning they can handle because they have not been denied that one magical ingredient. 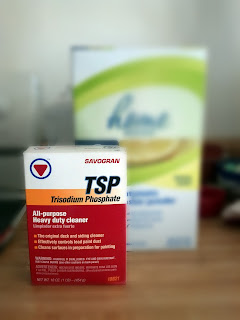 GUESS WHAT HAPPENED???  I killed a bunch of wild aquatic life, I guess.  I also have the cleanest, shiniest dishes I've had since the Nixon era or there abouts.

So the lesson here is this:  one load of dishes washed at the regular cycle setting with 1/2 teaspoon of TSP per load is at least three times better for the environment than one load of dishes washed three times at the power setting and then having to be hand washed to get off the stuff that the dishwasher didn't take care of like it was 'possed to.